When you’re up against virtually every major card issuer in the country, all vying for the position of top card in what is said to be a “revolutionary” and “game changing” new payment system from, arguably, the world’s leading information technology company, there’s really no time to sleep… especially if you’re the chief marketing officer at JPMorgan Chase. In an effort to be the first big bank to get its marketing about Apple Pay™ out the door and into consumers’ hands, Kristen Lemkau, CMO at JPMorgan Chase, and her team were ready and willing to stay up late.

Apple officially announced Apple Pay on September 9. Chase answered with a stream of constant tweets about the new payment system throughout the day. 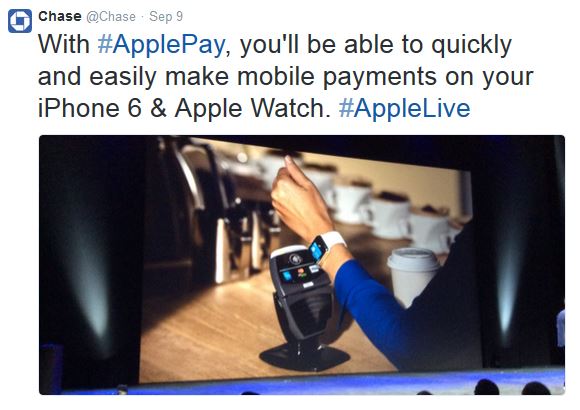 In addition, Chase pushed out an official email blast to customers on September 10 at 2:33 a.m. introducing Apple Pay as “the new way to pay.” Here’s a quick snippet: “Apple Pay, like our award-winning Chase Mobile® App, is another way we’re committed to providing the tools you need to manage your finances on-the-go.” 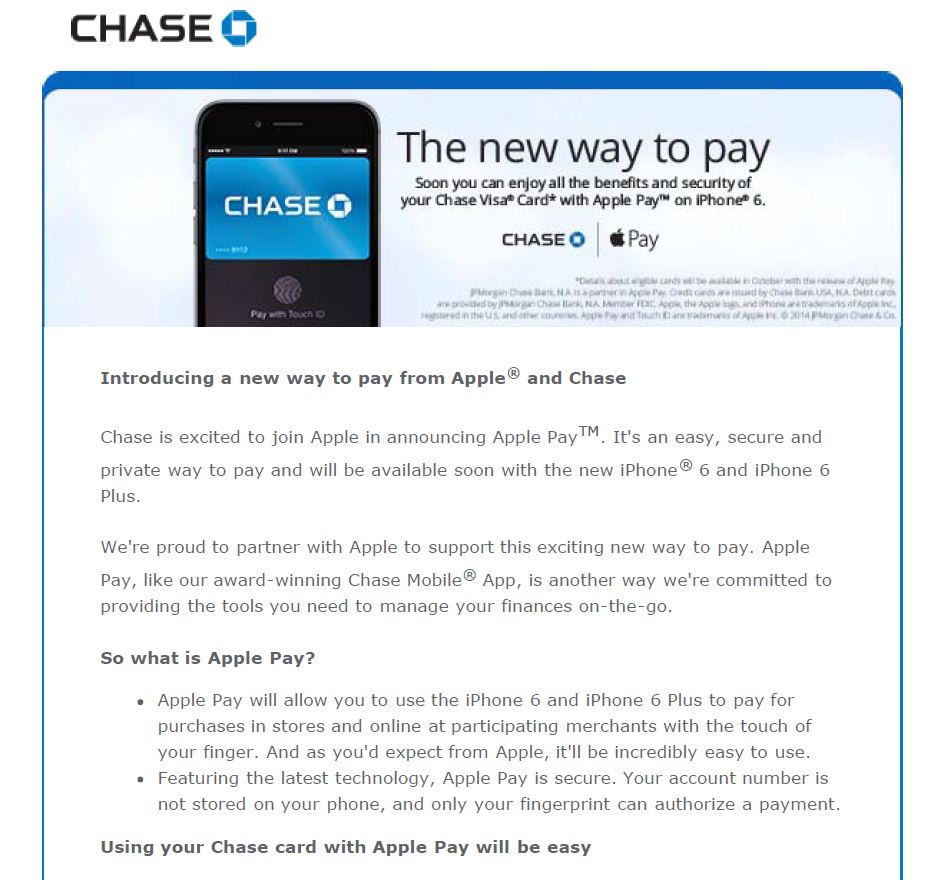 Chase used this initial email communication to not only announce this new partnership with Apple, but also to reinforce the bank’s commitment to being a leader in helping customers manage funds “on-the-go.”

Seemingly in an effort to align with Apple’s marketing strategy around the announcement of Apple Pay (which relied heavily on the use of social media to reach its tech-savvy, “on-the-go” audience ingeniously teasing #WishWeCouldSayMore to entice followers and create a frenzy of excitement just hours before the official Apple Pay announcement), Chase focused first and foremost on real-time media with its own announcement.

Although under strict guidelines from Apple on how it can advertise Apple Pay to customers, according to AppleInsider.com, Chase answered Apple’s announcement of the new payment system with a strong presence on both Facebook and Twitter, offering Apple Pay SDK Webinars, targeting #SBOs (small business owners) and using #ChasePaymentech to connect a constant stream of tweets linking Chase’s global payment processing expertise with the new Apple Pay. The bank then broadened its scope, pushing the announcement to its websites, initially featuring the new partnership on their corporate JPMorgan Chase site and eventually showcasing it on Chase.com’s credit card page.

The Chase Freedom® card is featured front-and-center – literally, the card appears front-and-center on your screen – holding the #1 card position on Apple’s Apple Pay webpage, pushing the card to top-of-mind with consumers and securing its position as a frontrunner in this marketing race. 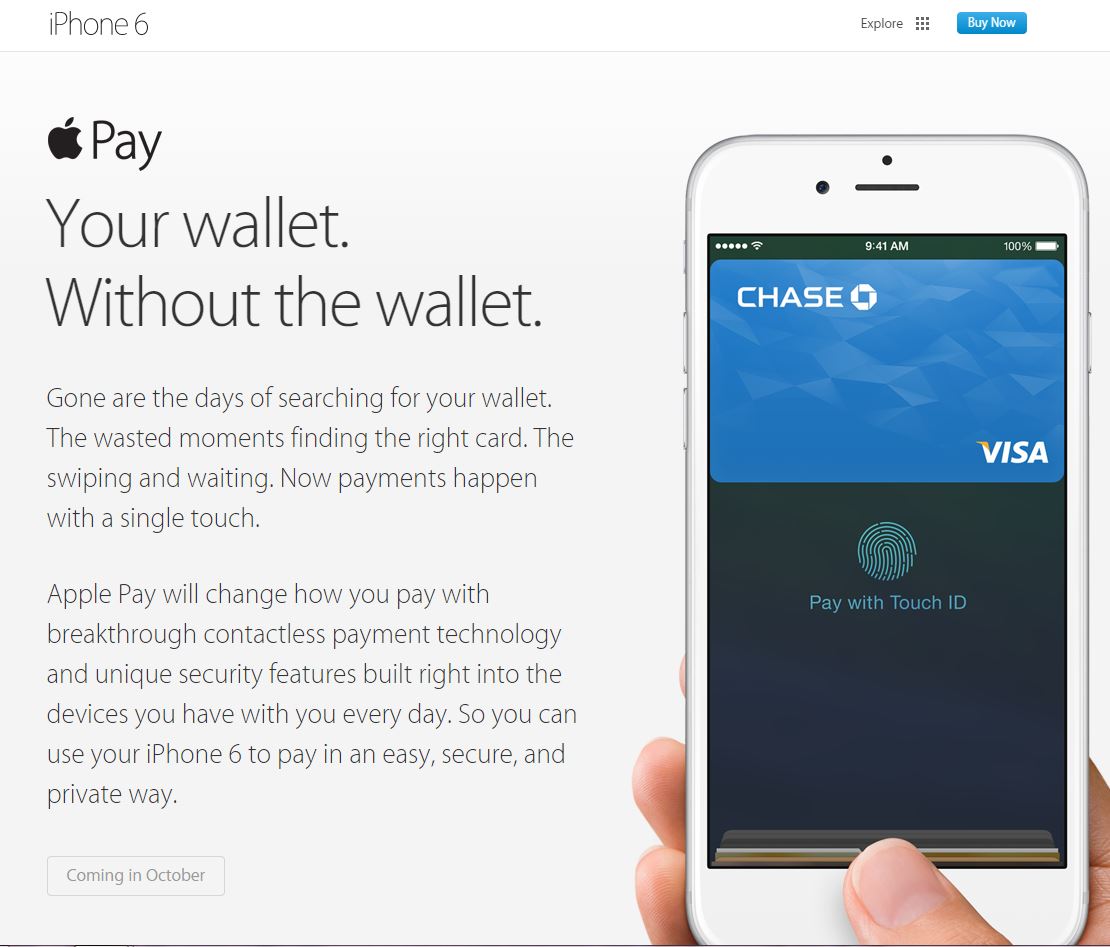 Chairman and CEO Jamie Dimon was also one of only three representatives from the many top banks partnering with Apple Pay to be quoted in Apple’s official press release announcing the new payment system. “JPMorgan Chase has been pleased to collaborate on Apple Pay to create a better, faster and safer payments system, which puts the customer first, creating an exceptional customer experience for consumers and merchants. Everyone wins,” said Dimon.

Need a quick refresh on what this “revolutionary” payment system has to offer? Here’s the low-down that Chase and Apple are giving consumers:

Come October, and the official launch of Apple Pay, we will be able to tell how well Chase’s late-night marketing efforts really paid off. Though something tells me that Chase losing a few hours of sleep will be well worth it in the end.

Over the summer Visa launched Visa Checkout, an online payment tool that allows cardholders to save their personal and card information in one place and then easily use it for pay across different merchants. So far one major aspect of their campaign is to use video content to execute a tried and true, two-step process for a product launch.

As financial institutions seem to be increasing mail volume and many senior loan officers expect to see a turnaround soon in card growth, it’s possible that 2014 could be the year that credit cards, like the broader economy, finally hit their stride.

With credit cards falling out of favor for this segment, what can banks do to make sure they don’t lose their next generation of customers? We have a few ideas.

Driving awareness of a service to expand usage—even where cards aren’t accepted.

While research indicates both consumers and small businesses prefer paying bills online with a credit or debit card, there are still many billers that don’t accept cards.