It took a bit of work to separate wheat from chaff for the January-to-March update to the Media Logic Retail Marketing Report. Most tracked brands experienced a slowdown in fan acquisition after the holidays.

But 15 retailers defied the general trend and posted continued fan base growth into the first months of 2011. What did they do? And what can we learn? 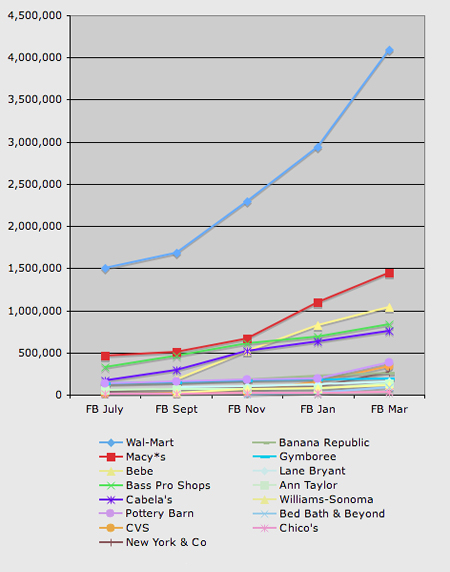 On Facebook, Walmart deployed a multi-prong social promotions strategy: part Pepsi Refresh Project-like community relations, part Groupon-like savings and part old-fashioned simple discounting. On Twitter, Walmart devoted a majority of its feed to the promotion of its sustainability initiatives. This strong cause/promotion balance, along with a big investment in conversation management (Walmart lists 12 managers for Twitter alone), paid off.

Recreation brands Bass Pro Shops and Cabela’s both edged toward the magic million fan mark in their ongoing neck-and-neck battle for the most Likers. Although Bass Pro turned in slightly better growth stats, Cabela’s continues to outpace all other retailers in attracting fan feedback and user-generated content.

Specialty Apparel brands Lane Bryant, Ann Taylor and New York & Company entered into the spring fashion season on a big social upswing. In fact, NY&Co almost tripled its Liker base in two months to 268,000 fans with a simple low-lift social promotion that promised daily gift card prizes. By Media Logic’s estimate, this single promotion increased the annual media value of NY&C’s Facebook by at least $250,000, not a bad return on investment.

Select brands in the Specialty Hardlines sector repeated the success they had between November and January. Pottery Barn and Bed Bath & Beyond both posted big numbers, and both continue to attract positive user comments and user-generated content on their well-managed walls.

The findings reported in this update underscore the continued value and utility of the recommendations made in the Media Logic Retail Marketing Report. Brands that have followed its sector-specific advice are flourishing in social space, creating significant media value in their Facebook and Twitter feeds, and no doubt generating increased brand loyalty and word of mouth, not to mention traffic and sales.

Media Logic has been tracking and studying the use of social marketing by retailers since early 2010. We’re ready at a moment’s notice to present tailored strategies and creative concepts to any retailer on this list … or any retailer who would like to get on it.